1 Tbsp of Flax Hulls is = Equal in Lignan Nutritional Value to Consuming an est. 2 GALLONS of Flax Seeds or 140 lb of Fruit and Vegetables!

Flaxseeds are abundant with lignan compounds, which hold therapeutic value for a number of diseases. It not only prevents inflammation in the body, but also cures Parkinson’s disease and respiratory problems.

Besides curing inflammation, lignans also put a stop to type-2 diabetes, and modestly improves the level of blood sugar in the body.

Flaxseeds improve the health of the heart by reducing the amount of LDL or bad cholesterol from the body and increasing the level of good cholesterol or HDL.

The antioxidant and photochemical rich flaxseeds are loaded with lignans, as well. It has been told in earlier points that lignans are helpful in treating diabetes and inflammation, and hence, can be regarded as a major nutrient of flaxseeds. Lignans also help in balancing the female hormones, reducing PMS symptoms, and increasing fertility.

Flaxseeds have a high amount of omega fatty acids, like omega-3, 6, and 9. These fatty acids induce the growth of healthy cholesterol inside the body.

Flaxseed is an oily food grain, which acts as a natural laxative. It regulates proper movement and elimination of bowel, resulting in the reduction of constipation.

The omega fatty acids and lignans combine together to improve resistance of the body. The enhanced immunity level combats the alien substances, which are responsible for several disorders in the body.

The tiny, yet powerful flaxseeds fight with cancerous cells and thwarts prostate, breast and colon cancers. Again, all the credit can be given to the lignans and omega fatty acids present in the flaxseeds.

Consumption of flaxseeds by children, suffering from ADHD, has shown significant positive results according to various researches.

Flaxseeds are a great source that helps you in managing your weight. It not only stabilizes the blood sugar level, but also increases five times in volume, when eaten. Because of this expansion, you tend to crave less for food. Take flaxseeds every day before half an hour of having dinner. This will manage your weight efficiently.

Having flaxseeds daily improves the density of bones, thereby preventing bone loss and diseases, such as osteoporosis. 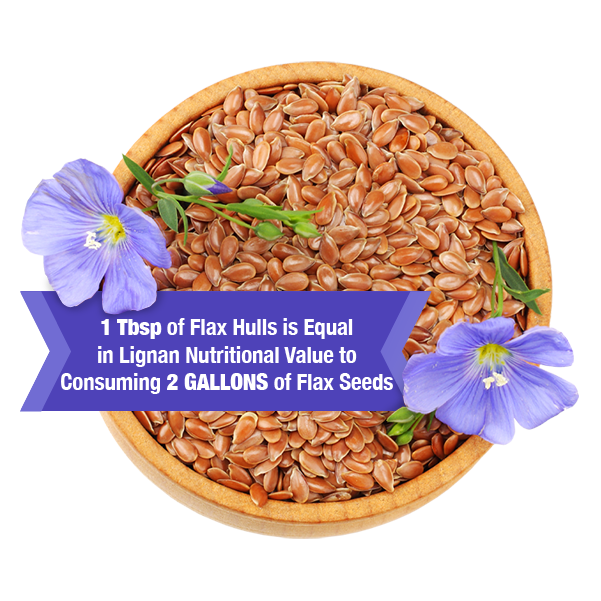 Before starting the Flax Hull Lignans, I would have a bad cough and would throw up stuff that I think was from my sinuses draining during the night. I used to get bad headaches from sinus pressure also. Now I don’t cough as much in the morning and hardly ever seem to throw up. The sinus headaches are not as frequent now. I also seem to have a “better feeling” overall.

I have noticed a slight improvement in joint pain since I have been taking the Flax Hull Lignans. I have had arthritis for years. Also, I seem to be sleeping better at night. I take a sleeping aid at bed time yet I still have some trouble sleeping

Yes, I am delighted to be able to report the changes we have experienced by using the Concentrated Flax Hull Lignans. My husband and I are in our fifties, and are starting to show a little wear and tear from fifty years of living, so this is the time when we are looking everywhere for natural ways to prevent any serious problems before they strike. (We don’t resort to Western medicine because we feel it is often more life-threatening than the diseases)...